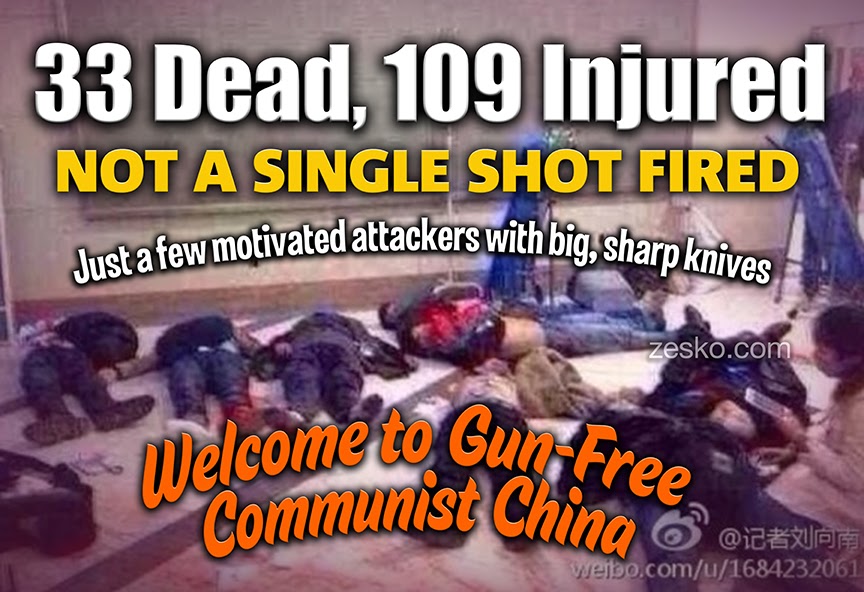 Once again, banning private gun ownership has NO EFFECT on human nature. Ban guns, as Communist China did long ago, and the gangs (or "terrorists," or "madmen," or whatever you want to call them) just move on to bombs, knives, baseball bats, shovels, golf clubs, pesticides, or whatever weapons may fall into their possession.

You know, if there is any correlation between weapon availability and homicide rates, then the United States apparently defies that correlation.

In the USA, there are approximately 90 MILLION legal gun owners in possession of approximately 300 MILLION firearms; yet, the gun-related death toll in the USA is LESS than 9,000 per year, and TWO-THIRDS of that number are suicides — the remaining third of these deaths comprise of gun-related homicides, accidental gunshot deaths, police action gunshot deaths, and self-defense gunshot fatalities.

Which, to me, says that less than ONE-TENTH of ONE-TENTH of ONE PERCENT of legal gun owners could POSSIBLY be blamed for contributing to the annual death toll in the USA.

That's a REMARKABLY SLIM correlation, if you can call it a correlation at all.


Just for the record, the worst single-gunman mass shooting in modern HISTORY occurred in the European Union (Norway, 2011), when a fellow named Anders Behring Breivik very calmly and methodically shot and killed 77 people in a little over an hour's time.

Norway is "gun-free" (whatever that means), but European gun bans don't seem particularly effective against those who refuse to obey their draconian gun laws.

I mean, the anti-gunners always love to showcase these totally fabricated numbers of CHILD deaths as a result of gunfire in the USA... I think the current anti-gunner "statistic" is 10,000 kids shot annually in the USA, with 3,000 fatalities. This preposterous number exceeds ALL non-suicide gunshot fatalities in the United States annually. Of course, the anti-gunner statistics are shamelessly COOKED and patently FALSE.

USA Today even dared print that guns kill TWICE as many kids in America annually as CANCER — therefore, they claim gun violence against children is "an epidemic".... Pardon, but, according to the National Cancer Institute, about 1,500 children die of cancer annually in the USA.

So, USA Today is claiming that 3,000 children are killed by gunfire annually in the USA.

But, hold on... There are LESS than 9,000 gun-related deaths in the USA annually, and TWO-THIRDS of those are SUICIDES....which means the 3,000 child fatalities MORE than make up the remaining THIRD.

Yet, USA Today claims there are 3,000 CHILD gunshot fatalities annually in the USA.

These numbers don't work out, do they (unless there is a secret "epidemic" of children deliberately committing gunshot suicide by the thousands)?

What's obvious is that USA Today, following a transparent anti-gun agenda, is shamelessly FABRICATING the number of child gunshot deaths in the USA.

Keep in mind, you are FAR more likely to be butchered in the street by machete-wielding Muslim radicals in London, England, than ANYWHERE in the USA.