NOW, WHO WAS IT THAT TURNED VIETNAM INTO A MEAT-GRINDER?

Time for a dose of TRUTH, before the Liberal-controlled media further poisons your minds.

Last night I streamed-in the Independent Film Channel (IFC), where a lot of new film work gets some well-deserved public exposure.  For example, The Blair Witch Project pretty much evolved on IFC in the 90s before it ever hit the big screen, okay?  Blair Witch was a $64,000 movie that grossed, like $130,000,000.  Fascinating story behind it (another blog, maybe).

Anyway, I still stream-in IFC to see what's cooking in the indie film community, so I streamed in this documentary about LBJ and Richard Nixon and the Vietnam War.  I erroneously thought it was a new documentary.

Now, for you people who weren't born until the 1980s and 1990s, Richard Nixon was a real American patriot, he was a Navy man in WWII, he was a good friend of John F. Kennedy — they were drinking buddies, okay, who had very similar conservative ideas, and they both hated Communism.

In fact, when JFK and Nixon ran against each other for the presidency in 1960, it was a fairly conservative campaign on BOTH SIDES.  Both Nixon and JFK had served in WWII, and JFK was a war hero, of sorts.  These guys were cut from the same mold, okay, and they were campaigning on conservative issues coming out of the Eisenhower administration of the 1950s.

In fact, one of the biggest concerns that conservatives had about JFK was that he was a New England Catholic.  Oooooh, a Catholic!  The controversies of the 1960 election were, like, NOTHING compared to the horseshit we see in politics today.

But this documentary I was watching on the IFC painted a picture of Richard Nixon as a MONSTER who ESCALATED the Vietnam War into a meat grinder for American troops.

And I'm sitting here thinking, I don't believe this.  I do not believe that I live here in America and I'm watching a piece of Liberal historical revisionism that is not only egregiously WRONG in its premise, but it's insidiously and aggressively biased against a man who's been dead for 18 years.

I mean, why  further assassinate a man's character decades after the fact?  What is the purpose of this documentary?  Why is IFC showing it?  Well, obviously, it's about indoctrination, it's about disseminating disinformation in order to indict those associated with Richard Nixon — namely, the GOP.

The documentary's intent was revising history to turn Richard Nixon into a grinning demon for posterity.

I later discovered that this cinematic horse pill was an ancient 1974 documentary, Hearts and Minds, by liberal anti-war film maker Peter Davis (the Michael Moore of his day).  This guy, I think, may be one of the flies in the ointment.

I think this Davis character, and Bob Woodward and Carl Bernstein, and all the other truly dreadful renaissance Liberal journalists who went after Nixon because they could, are the painters of NOT an honest historical portrait of President Nixon; verily, they chose to REVISE history in a very determined and hateful fashion.

I mean, what have you gone back and RESEARCHED so that you KNOW you have the facts in hand?

Most of you probably have never researched anything in your lives.  I'm not condemning you.  It's lamentable, but it's the fault of the education system for BLUNTING your curiosity.

In my life, I've NEVER been satisfied with the first answer, nor even the second or third answers.  Given a particular project or crusade, I used to plow into the Library (call it the Whole Earth Database of days gone by), and follow the Who's Who and Facts on File and footnotes and bibliographies until I had CORNERED the Truth.

Sometimes it took days, even weeks.  When I grew bored, I would research topics for other students, and I'd write their papers for them, too, index cards inclusive.

Today, however, we have this marvelous, transparent (well, mostly transparent) Internet that gives us access to a million-million databases on every subject we could possibly want to study; yet we still have these scumbags attempting to REVISE HISTORY, to CONTAMINATE our databases with FALSE information, and they do it in order to advance their petty political agendas.

So, even AFTER these scumbag liars have passed on, their LIES remain to confuse and indoctrinate the unwary.

So, what do you think you really know about Richard Nixon?  Uneducated people will say, aw, he was a conservative crook, he had something to do with Watergate (whatever that was), he got caught doing what all presidents do, he turned the Vietnam War into a meat grinder, et cetera, et cetera.

Almost all of which is bunk.  I say almost because, yeah, Richard Nixon authorized the break-in at the Watergate Hotel, where the Democratic National Committee had campaign offices.  So what?  His stupid henchmen botched a break-in, got caught trying to steal information about the Democrat presidential campaign in 1972.

What Nixon did was HARMLESS FUN compared to the bullshit that the Kennedy boys pulled.

John F. Kennedy, remember, was a good friend of Richard Nixon, they shared many of the same conservative convictions about America.  But John Kennedy was a MEAN sonofabitch who used the Internal Revenue Service like a WEAPON against his political adversaries and those even vaguely perceived as adversaries.

John F. Kennedy spied on private Americans like hell wouldn't have it, he surveilled and threatened political activists and organizations, he did things that Americans would NOT tolerate in a transparent society today, okay?  He got away with it, and so did his brother, Bobby... Well, they almost got away with it.  Their legends got away with it, with a deluge of dreamy "Camelot" pablum and all that nonsensical Liberal crap; but the Kennedy boys got themselves whacked.

You don't step on toes the way they did without bringing some retribution upon yourself.

John F. Kennedy planted cameras and microphones all over the goddamned place, because he was paranoid (and for good reason, people were out to get him).  It was the wiretapping equipment from JFK's administration that Nixon was still using in 1972.

JFK was an unconstitutional, spying fool who was into serious domestic espionage, and that's just a fact; but where in the HELL did this caricature of Richard Nixon originate, depicting him as the big, bad U.S. President who fucked up in Vietnam?

Where did that come from?

Because it's not true.  I was alive back then, and I remember.  Besides, the official records of the Vietnam War are on file in the U.S. National Archives, and I'll bring 'em out here for your perusal.  Here: 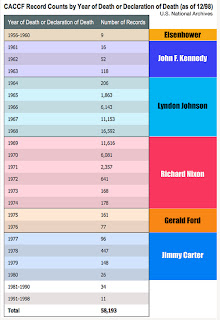 Now, what you're looking at is a table that I pulled directly from the U.S. National Archives, and I graphically dressed it up with colorful sidebars, so you can see the number of American deaths in Vietnam per-year and per-president.

Eisenhower got us involved in Vietnam originally, back in the 50s, as we offered technical advice to the French forces (who were up to their ass in North Vietnam and wanted out).  We lost only 9 guys during the Eisenhower administration.

Ike got us into Vietnam in an "advisory capacity," and JFK pretty much respected that level of involvement, as is indicated by the very low numbers of American deaths during his brief administration.  What are we looking at, less than 200 American troop deaths under JFK in Vietnam?  Hell, Bill Clinton saw 200 American troops killed in ONE BARRACKS BOMBING on his watch.

Sheesh, did you know over 14,000 American troops died on Bill Clinton's watch?  That's TWICE as many as died under George W. Bush.  Another inconvenient truth, but I digress...

Anyway, I think it's safe to surmise that JFK wasn't the big war dog in Vietnam.  JFK was more concerned about Cuba and Russia.

But, hold on... What's this?  Look at the American death toll under the NEXT administration, under that of President Lyndon Baynes Johnson.  Lyndon Johnson's administration didn't just "ratchet-up" the level of American operations in Vietnam, HE turned it into the veritable fucking MEAT GRINDER that we all remember with such revulsion.

Look at the numbers of dead under LBJ's administration.  It CLIMBS, nay it LEAPS from one year to the next.  In just ONE year, the year that Johnson finished his reign of terror, 1968, we know 16,592 American troops died in Vietnam.

If LBJ had remained in office?  Who knows.  He might've fed 20,000 troops to the meat grinder the following year.

But look what happens when Richard Milhous Nixon enters the White House in 1969, look at the number of American troop deaths.  They DECLINE.  It's more than a mere decline, the deaths drop off by THOUSANDS, year after year.  It looks like a "winding down," does it not?

Well, of course it is.  As soon as Richard Nixon, the friend of JFK, stepped into office, American troop deaths in Vietnam began to diminish.  Nixon brought the war to an END, he pulled American troops OUT of the meat grinder that LBJ started.

And THAT, friends, is what the Liberal Lefties want to hide from you, they want to hide the FACT that the mad dog Democrat Lyndon Baynes Johnson turned Vietnam into a MEAT GRINDER.

Hey, and I want you to print out my colorful little table of death and share it with your Liberal friends, if you would be so good.

But, in the meantime, just do the math, add up the deaths per-president, and see who the REAL monster is.  It was LBJ... The guy was a fucking maniac, one of the biggest stains on the Democrat Party EVER.

Sure, Richard Nixon had his little scandal with Watergate (which was all about two Liberal Journalists who were out to get Richard Nixon).  Nixon's actual transgressions are, like, NOTHING compared to the heinous shit we see today in the highest offices, shit that is condoned and disseminated across the nation, and swallowed in big goofy gulps by the gullible public.

Hell, Richard Nixon was a NICE man, he was a very intelligent man, he served in the same Navy as JFK, he was a thoughtful conservative who cared very deeply about America, as did JFK, and I know Nixon actually changed the world in a positive way during his administration.

Did you know China considers Richard Nixon a sort of a hero?  Nixon was the guy who opened up diplomatic relations between the West and Communist China back in the 70s.  They still think very highly of Nixon over there.

Nixon was a good guy.  Don't let anybody tell you different.
Posted by Zesko at 12:28 AM