HERE WE GO: EVIDENCE IS GOING TO EXONERATE GEORGE ZIMMERMAN

As I've said for weeks, the documented evidence in the Zimmerman/Martin case is hard-core going to exonerate George Zimmerman; in fact, the judge may very well dismiss this case before jury selection.

Make no mistake, this is a cut-and-dried self defense case with a MOUNTAIN of corroborating evidence.

The prosecution knew this going in, but Special Prosecutor Angela Corey buckled under public pressure and TRIED to serve this up as Second-Degree Murder, just to satisfy the lynchmob in Sanford, Florida.

The one piece of evidence that is going to bat this thing out of the park is a photo of the back of George Zimmerman's head.  Zimmerman said that Trayvon Martin was pounding his head into the pavement, which is why Zimmerman shot his assailant.

The bloody photo, taken about three minutes after George Zimmerman drilled Trayvon Martin, is solid proof that Zimmerman's life was in danger.  There are two distinct lacerations and a significant contusion on Zimmerman's scalp, distinctly visible in the photo.

ABC News has released a new photo of the back of George Zimmerman’s head, taken just “three minutes after he shot and killed Trayvon Martin.” His head is brutally bloodied. As the image above shows, there’s blood all over his head, at least two gashes, and a large bruise forming at the top of his head.

Zimmerman’s contention all along has been that Martin was bashing his head against the pavement, which is why he was forced to shoot him. The media – especially ABC News -- initially attempted to discount that story completely, releasing video of his booking at the Sanford police station that were not well-pixellated, and thus did not show the gashes on the back of his head. 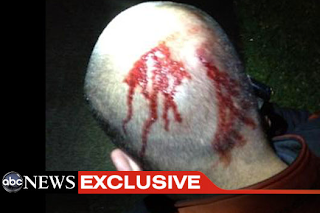 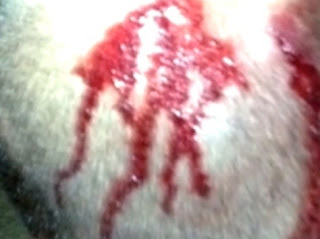 It took several days for ABC News to release an enhanced version of the video that showed that there were gashes on Zimmerman’s head. In the meantime, the media had a field day reporting that Zimmerman had shot Martin essentially in cold blood; Martin’s family claimed that Zimmerman was not injured; members of Congress, without any evidence, attempted to pass a resolution labeling the killing a racially-motivated crime.

ABC News reports that the source of the new photo was a witness to the aftermath of the event, and that Zimmerman asked the source to call his wife for him after the shooting.

Martin’s family attorney, Benjamin Crump, suggested that the photo didn’t mean anything because Zimmerman wasn’t brought to a hospital for stitches. “How bad could it have been if they didn’t take him to the hospital [and] didn’t stitch him up,” he asked. But that statement, of course, if Zimmerman’s head was being bashed against the ground, he had no legal obligation to wait until his injuries required immediate hospital attention.

I like that asinine statement from attorney Benjamin Crump: "How bad could it have been if they didn't take him to the hospital and didn't stitch him up?"

No, Trayvon didn't even need to spill Zimmerman's blood.  When Trayvon first ATTACKED George Zimmerman, he was posing a life-threatening danger — it was Trayvon's INTENT to commit bodily harm.

Under the law, Zimmerman could have drawn and pulled the trigger before Trayvon pounded his head into the pavement.  I mean, when a guy mugs you, the attack begins with the rush.  It's the INTENT of the assailant unleashed, okay?  Trayvon INTENDED to commit bodily harm.  If Zimmerman had seen it coming, he could've legally dropped Trayvon when the kid rushed him.

You know, they teach you in concealed carry training to maintain a good distance from a potentially threatening subject.  Seven yards, seven big steps, about 21 feet is a good distance.  That's because 21 feet is the distance a motivated human being can traverse in one second.

One second.  A guy with a knife or a screwdriver or a baseball bat or any given weapon can cross 21 feet of space and be ON YOUR ASS in one second.

One second is also how long it takes for an alert individual to draw and present a handgun.  On average.

Now, we know that George Zimmerman attended concealed-carry training because he has a concealed-carry permit.  Additionally, he is studying criminal justice.  So, I'm thinking that Zimmerman HAD to be thinking in terms of LAW when he followed and accosted Trayvon.

He asked Trayvon WTF, right?  What are you doing in this neighborhood?

Trayvon, who is a 17-year-old, 6'2" football player, cops a confrontational teenage attitude and probably told George to go fuck himself.

George Zimmerman retreated to his SUV, probably warning Trayvon that the police were on the way.

Trayvon, who is a 17-year-old teenager, and who IS confrontational by all accounts, lashes out at this little 5'7" neighborhood watch captain.

You know, if you think a 17-year-old male doesn't LOOK for trouble, you're living in a fantasy.  A 17-year-old boy is having these epiphanies on the threshold of adulthood, he THINKS he knows it all, and he IS going to confront people.  Confrontation driven by anger.

Because his wiring is not finished, right?  You KNOW I'm right.

Trayvon Martin's death is a case of Natural Selection, my friends.  Death by Misadventure.

Now, here comes Law Professor Alan Dershowitz, who I do not particularly respect because of his slippery and elastic way with the Law, but who SLAM DUNKS the Zimmerman/Martin case...
PROSECUTION IS NOT ONLY IMMORAL, BUT STUPID

With ABC News’ release of the George Zimmerman photo showing blood flowing freely from his head, the question becomes whether Angela Corey, the prosecutor in the case, had access to the photo before charging Zimmerman with second-degree murder.

The arrest affidavit did not mention the photograph, or the bleeding, gashes, and bruises on Zimmermans’ head. Professor Alan Dershowitz of Harvard Law School stated upon release of the arrest affidavit that it was “so thin that it won’t make it past a judge on a second degree murder charge … everything in the affidavit is completely consistent with a defense of self-defense.”

After the release of the photo, however, Dershowitz went much further, telling Breitbart News that if the prosecutors did have the photo and didn’t mention it in the affidavit, that would constitute a “grave ethical violation,” since affidavits are supposed to contain “all relevant information.”

Dershowitz continued, “An affidavit that willfully misstates undisputed evidence known to the prosecution is not only unethical but borders on perjury because an affiant swears to tell not only the truth, but the whole truth, and suppressing an important part of the whole truth is a lie."

When asked if it made a difference whether the prosecution had the bloody photograph at the time they charged Zimmerman, Dershowitz responded, “We do know that there were earlier photographs before the affidavit was done that strongly suggested blood on the back of the head, and we know the police had first access to him, so if there was blood they [the prosecution] would know about it …

"I've had cases in Florida against prosecutors,” Dershowitz said, “and this is not the first time they have willfully omitted exculpatory evidence. It's a continuing problem. Here, it’s not only immoral, but stupid. The whole country is watching. What do they benefit from having half-truths in an affidavit?"

Dershowitz added, "I'm not taking sides, but I'm insisting that both sides play by the rules, and so far the prosecution is not playing by the rules."

That means it's cut-and-dried self-defense.  Zimmerman walks.  Probably no trial.

I hope this experience has provided the seething, screaming jackals of lynchmob Justice in Sanford, Florida with at least a GLIMPSE of how REAL Justice works in America.